Quick summary: This newsletter has an organized, thorough, realistic list of the risks of joint replacement surgery. Use it as a tool to carefully judge your comfort level with the negatives that can accompany knee, hip, shoulder, or ankle replacements.

For decades, we have repaired specific parts in joints non-surgically. In so doing, we have helped countless patients avoid joint replacement and other surgeries. However, we quickly admit that not everyone is a perfect candidate for what we do, not every structure in a joint may be repairable, and joint replacement definitely has an important place in current day medicine.

At the same time, we are stunned at how patients consulting surgeons about joint replacement are usually not informed about what could go wrong. Joint replacements are massively invasive and dangerous surgeries, and patients are commonly told nothing of the risks until they sign off on a written list of risks when they show up on the day of surgery. If those patients had all the risks thoroughly explained months earlier, with lots of time available for relaxed discussion with the doctor, and then home study, their decision process may have changed. Giving an overwhelming list at the last second and expecting submission of the patient is a conscious tactic in the surgical field. Repeated TV drug commercials state side-effects that may be laughably overwhelming, eventually dulling the public to such risks. Could it be that drug companies know that repeatedly listing bad side-effects is a strategy to just make the public somehow indifferent to this repeated barrage of horrific side-effects? Only disclosing the horrible risks of joint replacement on a routine paper form at admission to the hospital or surgical center, with no doctor there to really discuss them, no time to study and reflect, is just another way to have those risks glossed over, while still getting the patient’s signed legal permission.

So, while we’d rather just be positive and talk about the nice things that our methods can accomplish non-surgically, it is also our responsibility to speak now and then about the risks of surgery and joint replacement. This is your organized opportunity to study and reflect on what risks these surgeries actually carry.

The Knee Society is a well known association of orthopedic surgeons. This group published a formal consensus list of the risks of knee replacement. The risks are similar for hip, shoulder, or ankle replacement. You can read the entire journal article, or, for your convenience, the following is their list of 22 risks, each one followed by a bit of explanation from me.

Well, perhaps you might think to marginalize each of these risks because each one may only be a 1% or 2% or 3% risk. Though some risks may have higher percentage probability, take the overview and see that you are looking at 1% or 2% or 3% risks TIMES 22. In other words, all the 22 risks add up, showing much bigger numbers, increasing your percentage risk of having some of these negatives happen to you. You could get through it without harm, as many do. But significant risk is there.

What’s missing from this list? Maybe more than I know. However, I can add that there is strong scientific evidence of chemical toxicities from the metals, bone cement glue, and other components of the prostheses. These stories of whole body toxic diseases are big news, and it is notable that the orthopedic surgeon association’s list does not include this widely publicized risk that can follow a patient for life. Here is a case; note how much of a run-around the patient received. This suggests that metalosis after joint replacement may be far more common than documented. Also note that the prosthesis need not be metal on metal to cause metalosis, but any metal parts can result in disease reactions like that described in the above case.

Another risk is simply a lack of success, that is, not getting rid of the knee pain. Different studies find up to 34% of patients are not satisfied, still in pain many months after their knee replacements, and far into the future. This can include pain from the joint replacement hardware, a different secondary pain called neuropathic pain (burning, stinging pain like diabetic neuropathy), and knee area pain that comes from the back, hip, or from other places, meaning surgery was done at the wrong area of the body.

Also ignored in the above list of 22 official risks is how long the replacement will last. Many surgeons turn away people too young because each subsequent replacement takes away more bone, reducing each bone shaft’s ability to anchor a new prosthesis.

Around the surgery, you’d have to take antibiotics. If the first antibiotics are not strong enough, you could be given fluoroquinolone antibiotics such as Cipro or Levaquin. They permanently damage tendons, ligaments, and nerves in your body, and even the FDA joins in the strong warning about this particularly devastating family of antibiotics. So, getting joint replacement might put you at risk of having to take these extraordinarily damaging medicines. Read about them by clicking here, make note, avoid them for the rest of your life, and also tell all your family and friends to read about this disastrous category of antibiotics.

Despite the use of various antibiotics, infection is a risk acknowledged in the official list above, but it is understated. The Knee Society group of surgeons is trying to limit their liability to the immediate post-surgical period. However, bacteria attack foreign objects in the body with a tenacious, persistent, lasting membrane form of bacteria called biofilm. These biofilms cling to joint replacements, likely forever. A published research study tested joint prostheses and parts that were removed from patients, even after years, and carefully analyzed for bacteria. 88% were infected. 88%! Some other studies have come up with different percentages, but the case appears strong that folks walking around with replaced joints are probably carrying infection. The nature of biofilm is that the film goes through cycles, clinging without seeding, and then periodically dumping some bacteria into the blood stream. That might cause some otherwise unexplained symptoms of recurring fatigue, weakness, possibly feverishness, years or decades later.

And, none of the above considers the risks associated with general anesthesia.

And, none of the above considers the risks associated with prolonged use of pain drugs required for some joint replacement patients that end up being more needy.

To summarize, risks of joint replacement surgery include many severe possibilities that add up to a significant cumulative load of risks. While joint replacement will work for some people, it is ultimately your job to judge the risks you are getting into.

We provide an alternative that may be suitable for your situation. Read NMPM.com thoroughly. Your joints and even your life may depend on it.

Wow. This has again been a very lengthy, wordy newsletter. I’ll try to keep the next ones short and light by comparison.

Please consider listening to some of the calming, peaceful music from our office music playlist:

Starlight Melody, by Denise Young, from the album Passionata

Moon-Silvered Clouds, by Deuter, from the album East of the Full Moon

And, after I sign-off, spend a moment with my photographs that may remind you of the natural world, so you may be inspired to pursue natural approaches to keeping you and your joints healthy and functional. 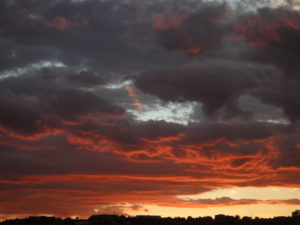